To be held in the Gillingham
Masjid on

The  Annual General Meeting and elections to fill FOUR vacancies is to be Insha Allahswt held on
Sunday, 07th May 2017.

Resolutions  to the AGM, if any, must be handed over to the Sec. Gen. by no later than
Friday, 28th April 2017 by Isha. No resolutions from the floor will be
entertained.

Nominations  are also invited for the above vacancies. Nomination papers and rules of
election are available from the mosque or on request from the Secretary
General. Closing date for the nominations is Friday 28th April 2017, by Isha.

Current  Membership list will be displayed on the Mosque notice board. Please check to
see that your name appears on the list if you have renewed your membership for
2016/17. You must renew your membership by 2 pm on Friday, 28th April
2017 in order to participate in the election of trustees for 2017. 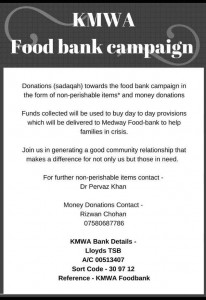 It has been confirmed in Saudi Arabia that Hajj will be on 11Th of September and Monday 12Th September 2016 will be the day of Eid InshaaAllah.

Eid Salah timings are 8am, 9am, 10 am – ladies are welcome for all prayer times

To be held in the Gillingham Masjid on

END_OF_DOCUMENT_TOKEN_TO_BE_REPLACED

Add KMWA to your Homescreen!